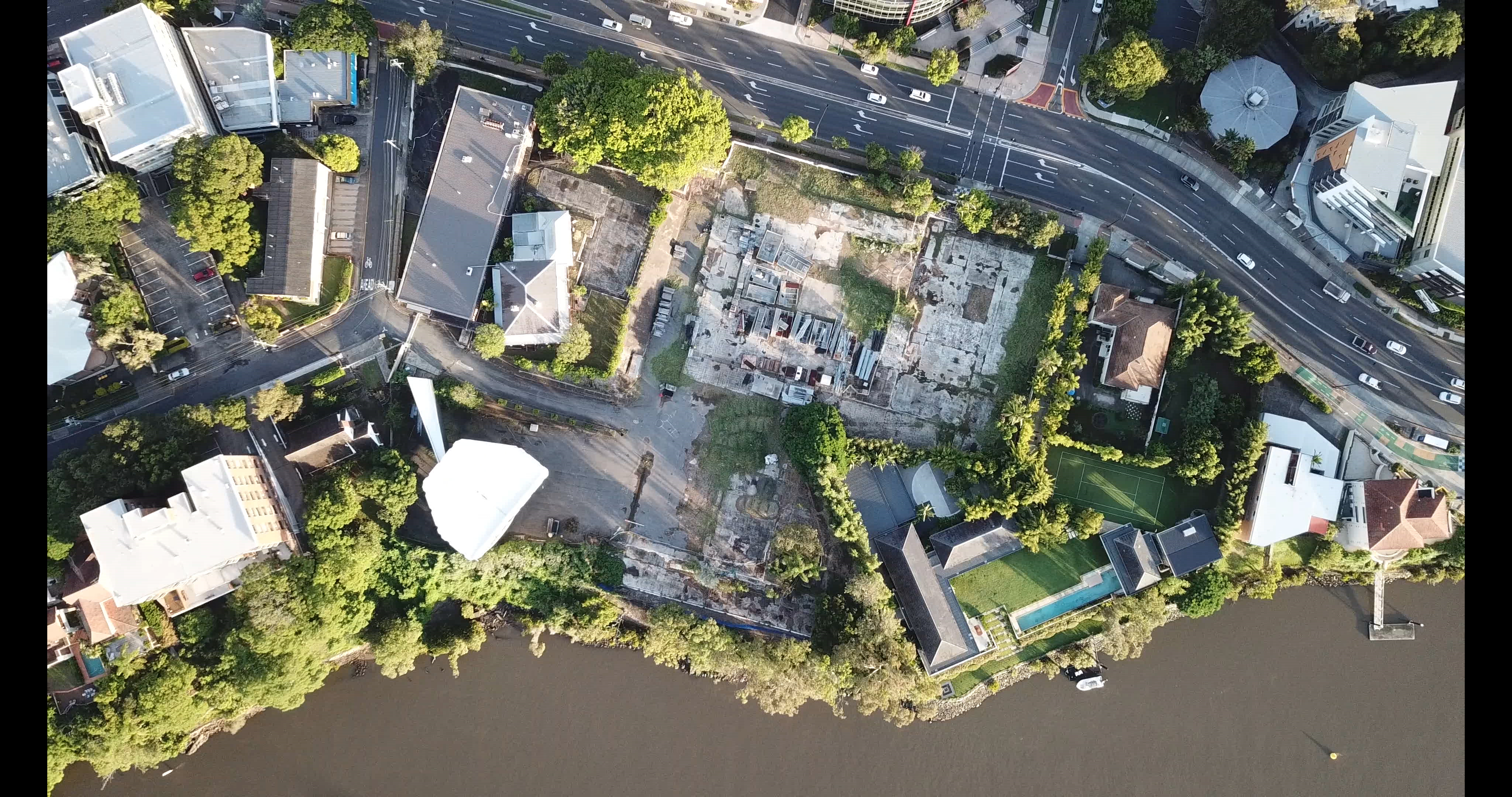 For the past couple of years, I’ve been calling on Brisbane City Council and the State Government to buy back the old ABC site at Toowong which used to be owned by the Federal Government, but was first sold to a private developer about a decade ago. It would make the perfect spot to land a walking bridge to West End and build an incredible new riverside public park.

In March 2021 we learned the site has been sold to another private developer, to build 200-250 luxury apartments. Under our incredibly broken planning laws, the community has no genuine consultation or appeal rights on this development because it'll be Code Assessable. This is exactly why we need to overhaul the Planning Act and make all major developments impact assessable.

The developer, Consolidated Properties Group, says they will allow for publicly accessible waterfront space, and public use of the heritage-listed building onsite. They're also encouraging Council to land the green bridge over to West End at the site. I think this is still a good idea, and given how much a bridge would benefit the luxury apartments, I believe Council should require the develop to allocate a significant portion of the land for green space.

I’m also calling on Council to ensure the heritage-listed Middenbury House is a public venue for local performances, events and community groups, not a privately-run enterprise.

Update: A rare opportunity to buy back the ABC site

In late 2021, the State Government announced that their proposed location for the new westside school is the old Toowong Bowls Club site, next to Perrin Park.

When the Queensland Government acquires the old Bowlo site for the new school, our community will need new green space and community facilities.

Back in June 2021, Council stated that they “do not support development resulting in a net loss of parkland. This includes the Toowong Bowls Club community lease site and its surrounds”. I was pleased to hear that Council had committed to ensuring no net-loss of green space for Toowong.

Council will get a multimillion-dollar sale price for the old Bowlo, and they must use that money to deliver new parkland and community facilities. I believe the ABC site provides the perfect “offset” for the Bowlo site, being of a similar size and within a distance of 1km.

Council is already planning to purchase part of the ABC site for the new Toowong/West End green bridge and a small new park. The ABC site even includes a replacement for the old Bowls Club venue - heritage-listed Middenbury House.

Locals have long called for the site to be turned into a riverside park. This is the perfect opportunity for the council to acquire it before it’s lost to private development.

If you agree, join the campaign, contact the Lord Mayor and Cr James Mackay and let them know how YOU would benefit from a new riverside park.

Can we still turn the whole site into a park?

I still think Council should buy back the site and create a new park there. If you agree you can sign my petition to the Lord Mayor and the Qld Treasurer to buy back this site for public green space - click here to sign.

I've written letters to the Queensland Treasurer and the Lord Mayor proposing that they buy back the site with a 50/50 funding split.

I’m also pushing for Council to bring forward the planning and construction of the green bridge - right now they've set a huge 10-year timeline! So in mid-2020 I wrote to the Lord Mayor asking him to expedite the Toowong and St Lucia green bridges to create local construction jobs and increase local amenity as part of a post-COVID economic recovery plan.

Why am I pushing for the site to become a park?

All over Brisbane, we’re seeing public facilities and green space sold off, with hardly any new infrastructure to keep up with rampant profit-driven development. The former ABC site was publicly owned land, until the Federal government sold it to developers in 2013 for well below market value. In doing so, they sold off the last remaining riverfront site of its kind, and lost the opportunity to provide Toowong with much-needed green space and a connection to West End.

Within 200m of the former ABC site on the Toowong side there are a whopping 3,500 apartments, either existing, in construction or recently approved. Just down the street, a major $450 million development proposal for the former Woolworths site at Central Toowong has been announced, which will mean even more families and activity in the area. Even still, half the public space in that same radius has been lost in the past few decades.

As part of this campaign we held a community vote on the idea, and more than 2,500 people had their say. You can check out a summary of the results and the full (anonymous) transcript of what people had to say about the idea here.

Here’s an artist's impression summarising some of the most popular feedback we received: 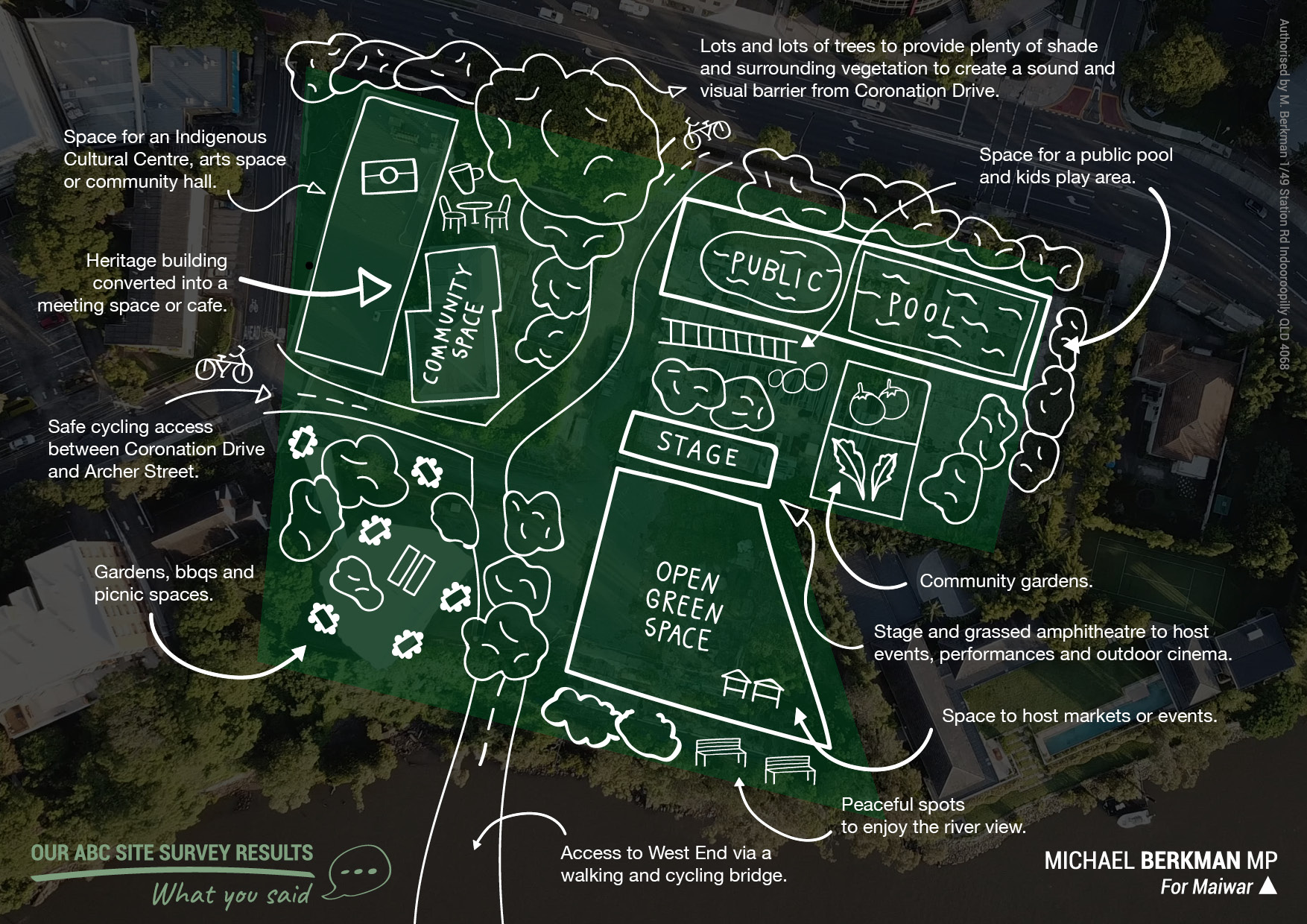 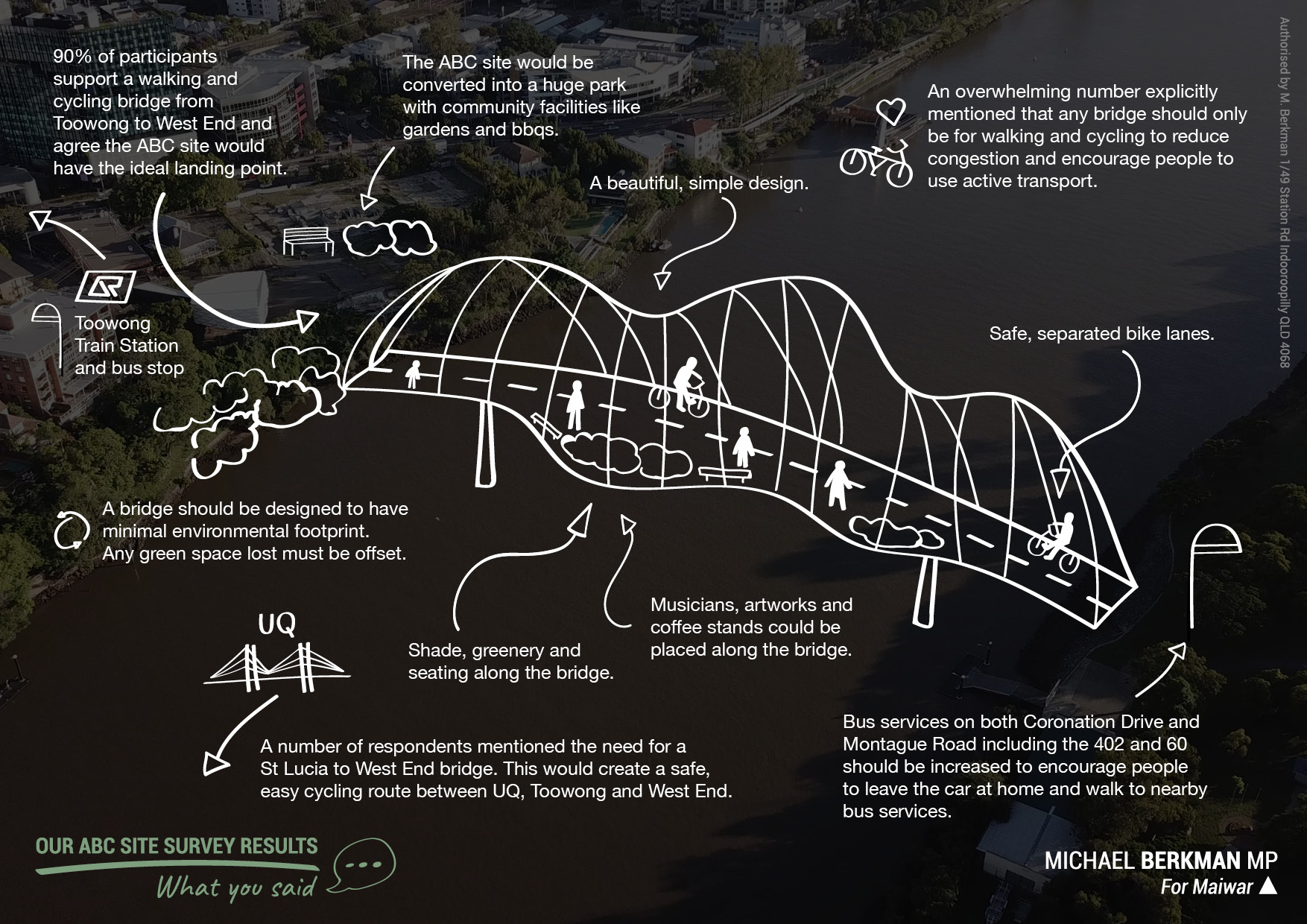 Following this huge community pressure from my office and Greens Councillor for the Gabba Jonathan Sri, the LNP Council announced they would fund a green bridge from Toowong to West End. This is a major win, and an important and long overdue piece of infrastructure. In another win, in response to input from residents and my office, Council has also confirmed the bridge will be walking and cycling only, to encourage active transport without sacrificing significant green space, bust congestion and connect residents with great bus and cycling routes that already exist on either side.

Would you like a fence sign for your house, calling for the ABC site to be turned into a park? Fill in this form and we'll get one to you.