Did you know Queensland's current laws allow 10 year old children to be locked in prison?

Our minimum age of criminal responsibility is out of line with international jurisdictions and our human rights obligations. It also doesn't work to keep the community safe.

Medical evidence shows 10-13 year olds don’t have the neurodevelopmental capacity to control impulses or foresee and understand consequences, so criminalising them like adults doesn’t work. In fact, early contact with the criminal legal system has been shown to increase a child’s likelihood of reoffending. We need to invest in solutions that work, not more prison cells.

In 2021 I introduced a Bill to Queensland Parliament to raise the age of criminal responsibility to 14 years old. My Bill was referred to the Parliamentary Community Support and Services Committee for consideration, and public submissions closed on 30 November 2021. Public hearings were held on 14 February, and the Committee delivered its report on 15 March. Unfortunately, despite 300+ supportive submissions, LNP and Labor committee members recommended the bill not be passed.

When the Bill was debated on 16 August 2022, Labor voted with the LNP, Katters and One Nation to defeat it. Only the Independent MP for Noosa supported our Bill. You can read my speech opening debate on the Bill here, and my speech replying to the arguments raised by other parties here.

When transitioning a child from detention or a watch house, efforts must be made to ensure they have access to things like accommodation, parental or guardianship support and health and other support services.

Alongside my Bill, I've proposed an alternative, staged model to replace the criminal system for children under 14, including early intervention and prevention, therapeutic responses to antisocial behaviour, and intensive case management for serious problematic behaviour.

A multidisciplinary expert panel outside of Youth Justice and Child Safety would be established to work with children and their families and refer them to support services, culturally appropriate community-led programs and restorative justice. Children’s hearings, similar to the Scottish model, could be held to determine whether small-scale, therapeutic supervision is necessary in the rare instances where children pose a serious risk of harm. 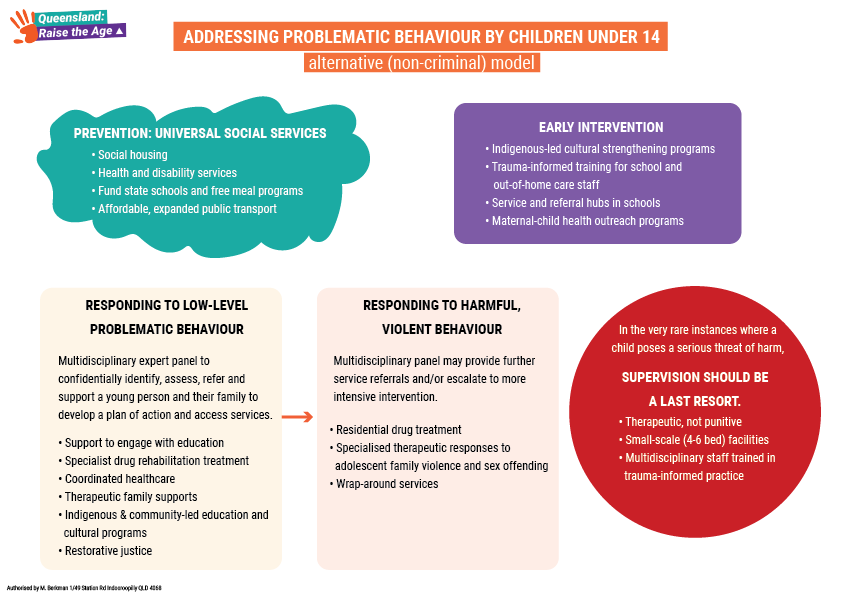 Raising the age of criminal responsibility is one part of a better approach to justice, and it'll help address the overrepresentation of First Nations people in prison. Overall, First Nations children aged 10-17 are 29 times more likely than their non-Indigenous counterparts to be sentenced to detention in Queensland. On average, 84% of children aged 10-13 in a Queensland detention centre on any given day identify as Indigenous. If the Queensland Government is genuinely committed to closing the gap and reducing Black deaths in custody, raising the age is a crucial first step.

Even though the Labor State Government didn't support my Bill, the fight to raise the age to at least 14 is not over. The ACT Government is moving to raise the age to 14 and organisations like Amnesty International and Change the Record are continuing to push for this reform. Sign up here to stay up to date on the campaign and how you can get involved.