Students 'march for our future' in Brisbane to stop Adani

A student-led march saw thousands of people protesting on Brisbane streets on Saturday, calling on federal politicians to take a stand against Adani's planned central Queensland coal mine.

The March for our Future was sparked when Adani announced last month it would self-fund its mine and start work before Christmas.

The coal project is being downsized from a 60-million-tonnes a year, $16.5 billion mega-mine to a more manageable 10-to-15 million tonnes a year costing about $2 billion.

"No longer will we sit back and be lectured to by people who are outdated and out of touch," speaker Thomas Cullen told hundreds of protesters gathered in Brisbane.

The 17-year-old was one of the thousands of students criticised by Prime Minister Scott Morrison for skipping school to stage national strikes calling for immediate action on climate change just more than a week ago.

He travelled to Canberra this week for a sit in on the marble floors of Parliament to confront Mr Morrison over the issue.

"We are preparing to show our leaders that we will not stand for their inaction," he added.

"We will strike until our leaders shape up and act."

"We are calling for politicians to take serious climate action and the first step to this is stopping new coal and stopping Adani," she said.

"It fills me with hope to have the people power to send out our message and the community is sharing the same views and saying enough is enough.

An Adani Mining spokeswoman said the company recognised there were varied opinions about the Carmichael project.

“The great thing about living in a democracy is that we can hold and express our different views," she said.

“All we ask is that people’s opinions are based on facts and that they don’t put lives at risk through irresponsible, illegal and unsafe protest behavior."

“We recognize there are varied opinions about the Carmichael Project and encourage everyone to voice them safely and respectfully, and also to visit www.adaniaustralia.com to learn the facts.”

The poll surveyed 2345 Australians on Tuesday after the Student Strike for Climate Action last week, when more than 400 students ditched school to protest. 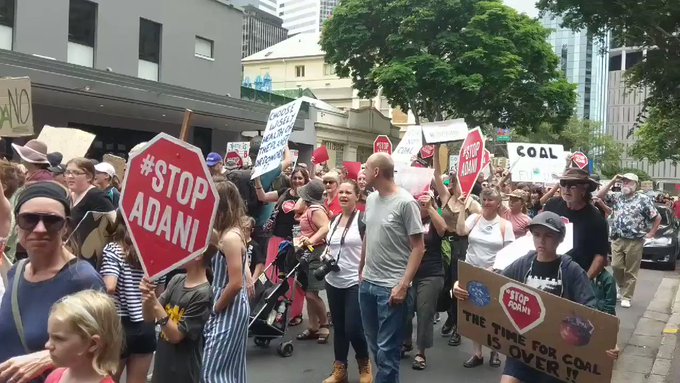 The Australian Youth Climate Coalition said the findings showed 62.7 per cent, including almost nine in 10 Labor voters, agreed school students had a right to demand the Morrison government to act on dangerous climate change.

Results also showed 58.1 per cent people, including 80.7 per cent of Labor voters, agreed the federal Labor Opposition should show leadership on climate change and oppose Adani’s coal mine.

“The poll also puts Bill Shorten on notice that a clear majority of Australians, and the vast majority of Labor voters want him to act to stop the Adani mine.

"Labor voters want strong leadership on climate change, not a would-be Prime Minister who says the Adani coal mine would make no difference to carbon emissions.”

“It’s their future being threatened by governments at all levels, and both major parties are failing to take meaningful action," he said.

“Kids are not given a voice in the process at all. Today is important, not just to send a message but also so they learn how to have a voice."

Premier Annastacia Palaszczuk said the federal government needed to have a climate policy.

"I believe that every single candidate standing in the next election needs to say whether or not they believe in climate change," she told ABC News.

In response to the Queensland Parliamentary Health Committee’s recommendation supporting legislation to allow Voluntary Assisted Dying, Michael Berkman is calling on Queensland Labor to legislate before the next election, starting with recalling Parliament:

In response to the National Cabinet decision to impose an eviction ban, Michael Berkman is calling on Queensland Labor to recall Parliament to protect renters.

Read more
Cancelling Parliament is a health risk: we must protect renters and homeowners

Responding to Labor’s decision to advise the Speaker to cancel Queensland Parliament until 28 April, which was announced at 5.45pm today Queensland Greens MP Michael Berkman said Parliament must sit, and that he is seeking to move amendments to protect renters as soon as possible:

Queensland Green MP Michael Berkman has called for schools to be closed to students from Wednesday this week in light of serious safety concerns for teachers and staff, and the uncertainty caused by other States abandoning a national approach.